Clad in new armour, Aeolus led Arachne, Aiako and Alcestis off into the dark, leaving Ariadne to guide the settlement. Aeolus wore new armour made of raw hide, while Aiako brandished an axe made of bone, and Arachne also sported a bone sabre. 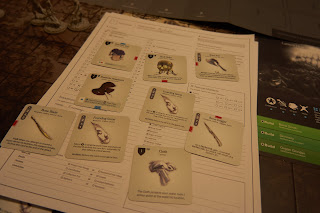 Listening for the roars of a lion, the sign of its tracks or smell of its scent markings, the troupe came upon a small lion cub in the grass. Choosing to instead leave the animal alone, they were confronted by a strange, twisted man, the Gambler. He loomed over each survivor, none able to speak, fearing that to do so would lead to death. But the strange figure soon left, happy with whatever he had found in the troupe.

As they continued through the wilderness they came upon a strange statue of a lion, and looking upon its form they came to better understand the creature that they stalked. Further on into the dark, they came upon a portcullis, stood alone in the night. They left it, confused. Soon darkness clouded their vision, and they attempted to make it through the fog. Aiakos fell behind, but he continued on, emerging from the night with a monstrous organ of some form.

On they walked and they found a pile of broken lanterns. They picked through the broken glass and metal and recovered a broken lantern that seemed to be of some use. And then they could see it ahead - a white lion. 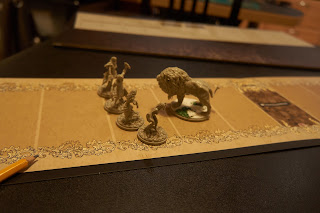 The troupe encircled the beast, making use of the long grass. Aeolus led the party, noting the weaknesses of the beast. Arachne threw her founding stone with all her might, striking the lion. Alcestis found a pile of debris and discovered a bladder filled with some hormonal excretion from a beast. Aiakos also pillaged a pile of debris, and found a tattered old sword. 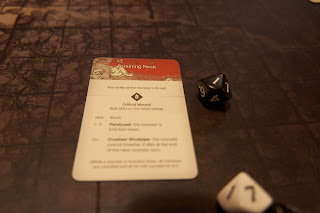 So close to killing the lion on the first attack! 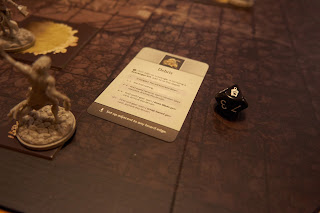 What a find! Aiakos now had a weapon superior to his own axe. 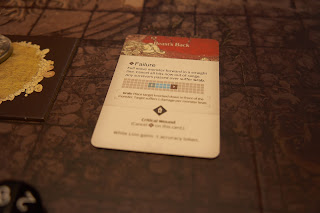 The fight began in earnest, with Alcestis moving to help Arachne. With the lion engaging them and swiping wildly. Arachne struck the beast and in return it grabbed Alcestis and dragged her away. 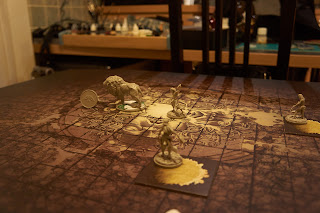 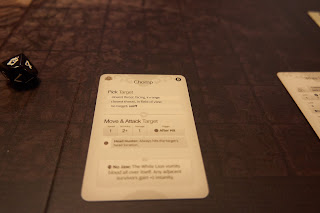 Aeolus hung back, directing the other how to attack. Aiakos and Arachne attacked it from the rear, dealing crippling blows (the beast was now in danger of loosing entire turns on a roll of a 1-2). It retaliated and chomped down on Arachne's head, but the sharp teeth met the solid bone of a skull helm (Yup, helps to stack that deck in your favour, which is what Aeolus was doing to the monster AI deck, and so knowing this I knew how useless the attack would be against Arachne). 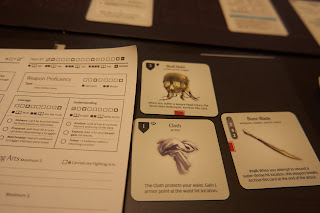 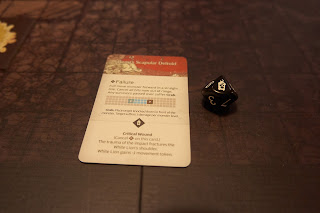 Critical wounds were racking up. Witness me! (yes, Sam was on hand to see these rolls). 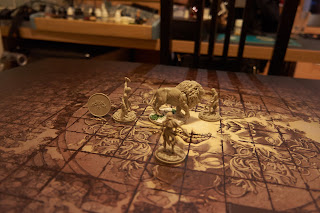 The lion was being attacked from all directions, with Aiakos using his new sword to dealing rending wounds. 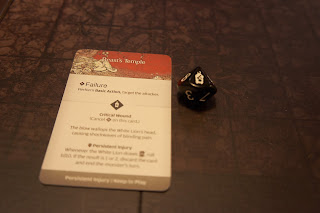 That "on a 1 or 2, discard the AI card and skip turn" result. Haha mister lion! 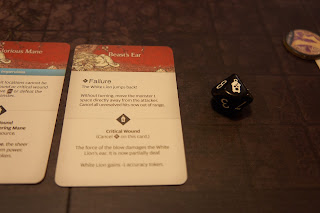 Seriously, this lion is limping, and at -2 to hit, leading to significant advantages in the fight. 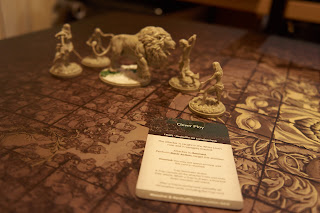 Aiakos went to strike the beast, but it was only playing dumb - for once - and lashed out. But even for all the guile and sneakiness, the lion missed Aiakos. 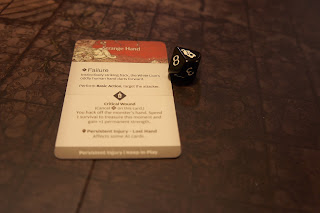 Alcestis smashes the beast's hand apart - no survival to spent as it was lost during the hunt phase. 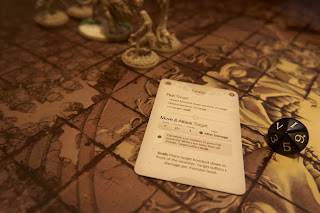 Sorry mister lion, you don't get to drag anyone away. 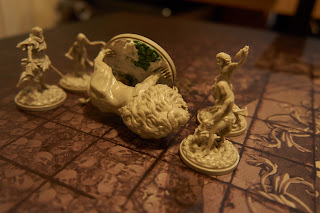 Arachne delivers the final blow, as all the other survivors surrounded the beast and tore it apart. Victorious  and bearing the fruits of their hunt. Bones, and meat and organs galore. 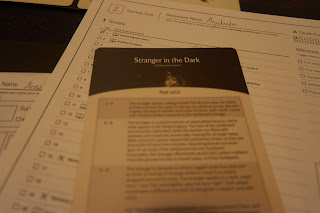 Returning to the settlement a stranger in the dark arrived. He was the Lamplighter, and as he peered into the eyes of some of those at the camp, two were found the next day, dead, with another suffering a wasting disease, and a fourth somehow filled with vigour and life.

Ariadne directed the settlement on how to mourn the dead - to eat them. The dead were torn apart, filling the minds of the camp with madness. But nothing was wasted, and their body parts were put to use to create new weapons. Using some of the monster musk that was found, and harvested, two of the camp were driven to lust, and a the settlement welcomed its first new life into the hellish world they lived in. The child was festooned with gifts and all the teaching the camp could give.

The settlement grew, with tents and hovels being fashioned from skins, basic brewing and leather treatments were now possible. And then there was a blood curdling scream. In the dark was something new. Not a lion, but some other creature. Aiakos called the others together, and he called for a hunt against it, that they would take the darkness and fill it with light.

And so, now armed with new weapons, Ariadne, Aeolus, Aiakos and Alcestis went off into the dark, to once more hunt a lion. 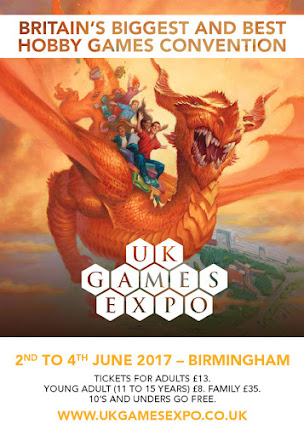 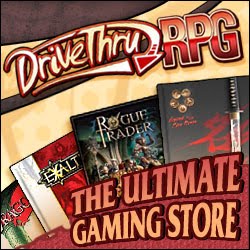